Why Sharks? Some Thoughts About The Ocean 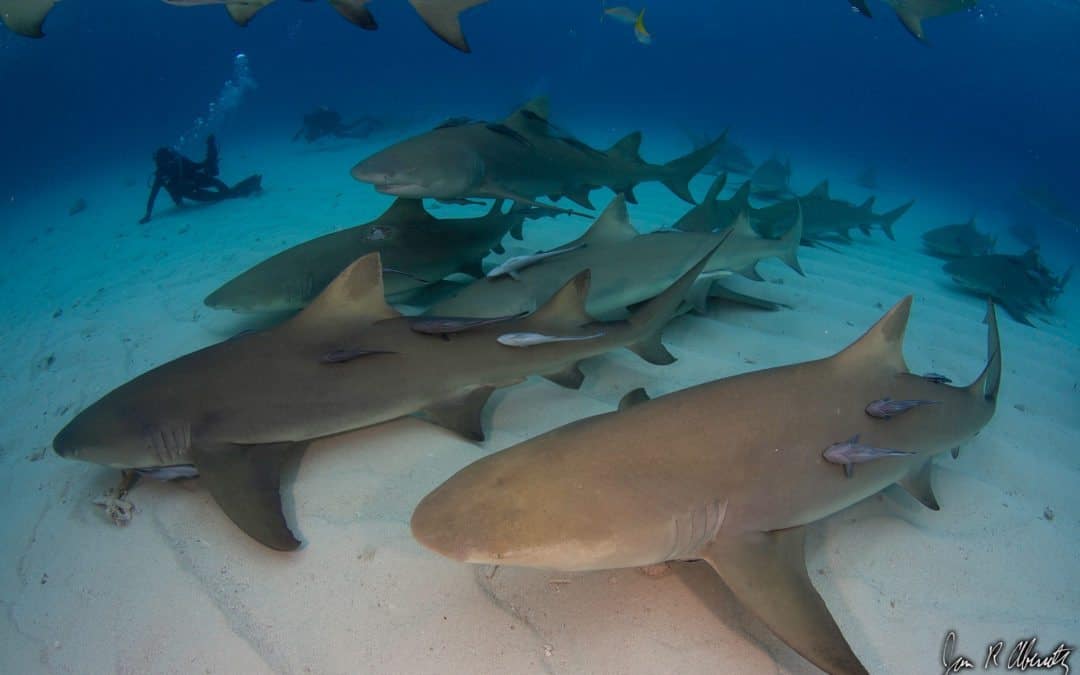 Before getting to ‘Why Sharks?” I wanted to say we are so happy to be included in Kikaha Magazine’s current issue! Kikaha is Island Air’s sumptuously photographed inflight magazine – and this issue focuses on a range of local Hawaii makers and producers. Its such a treat to be featured with so many interesting people! 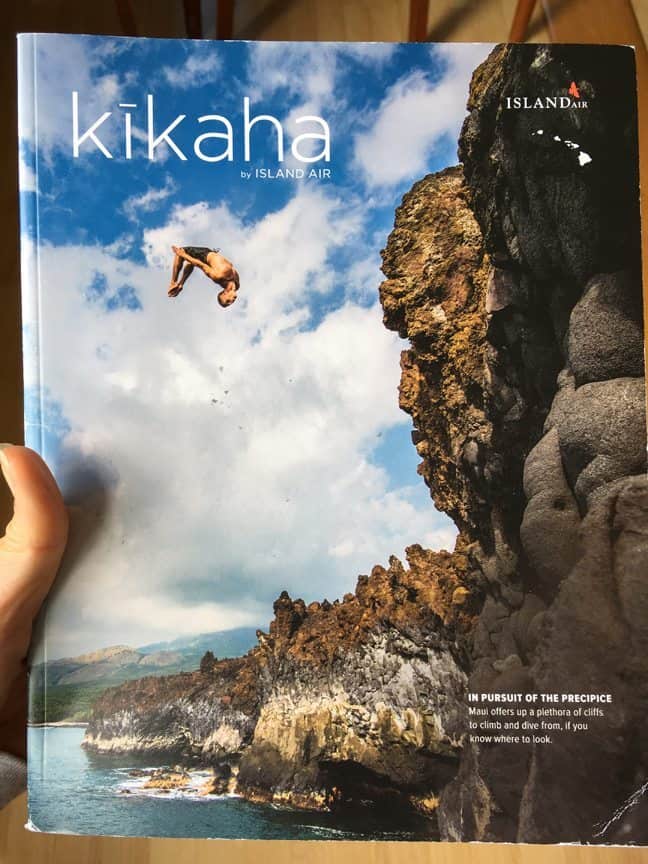 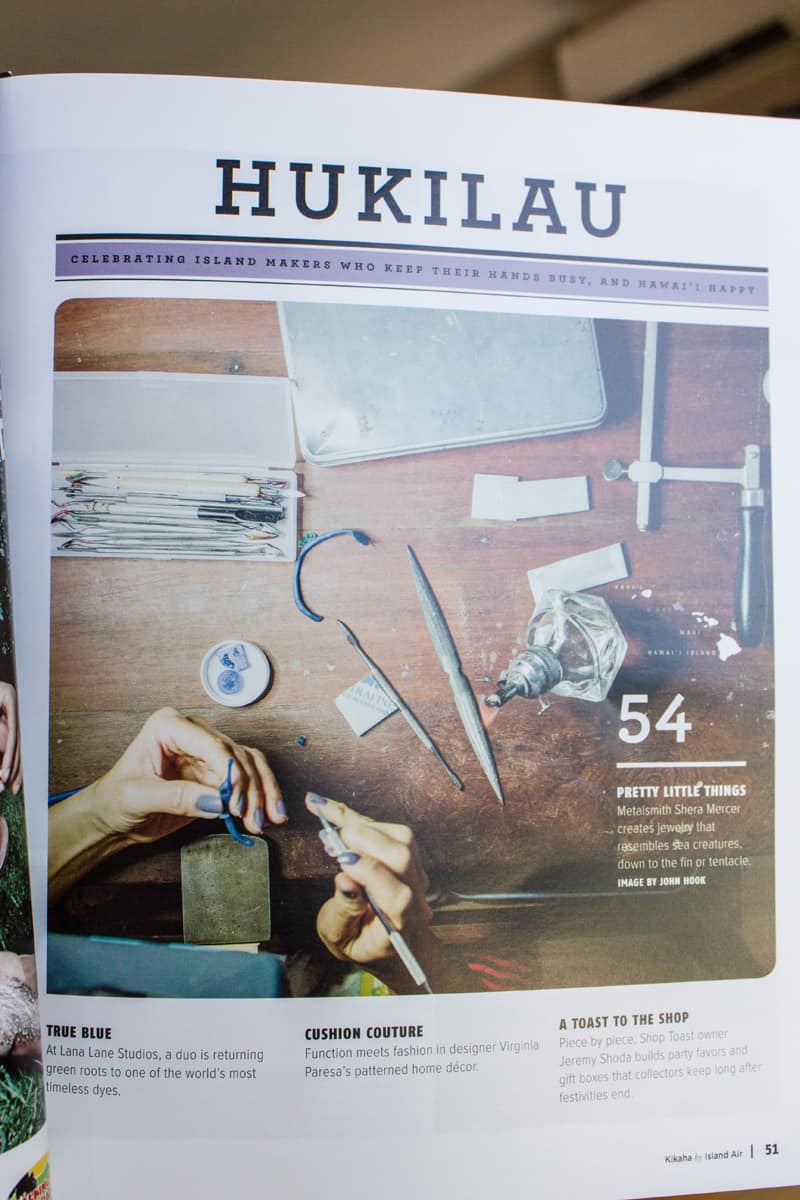 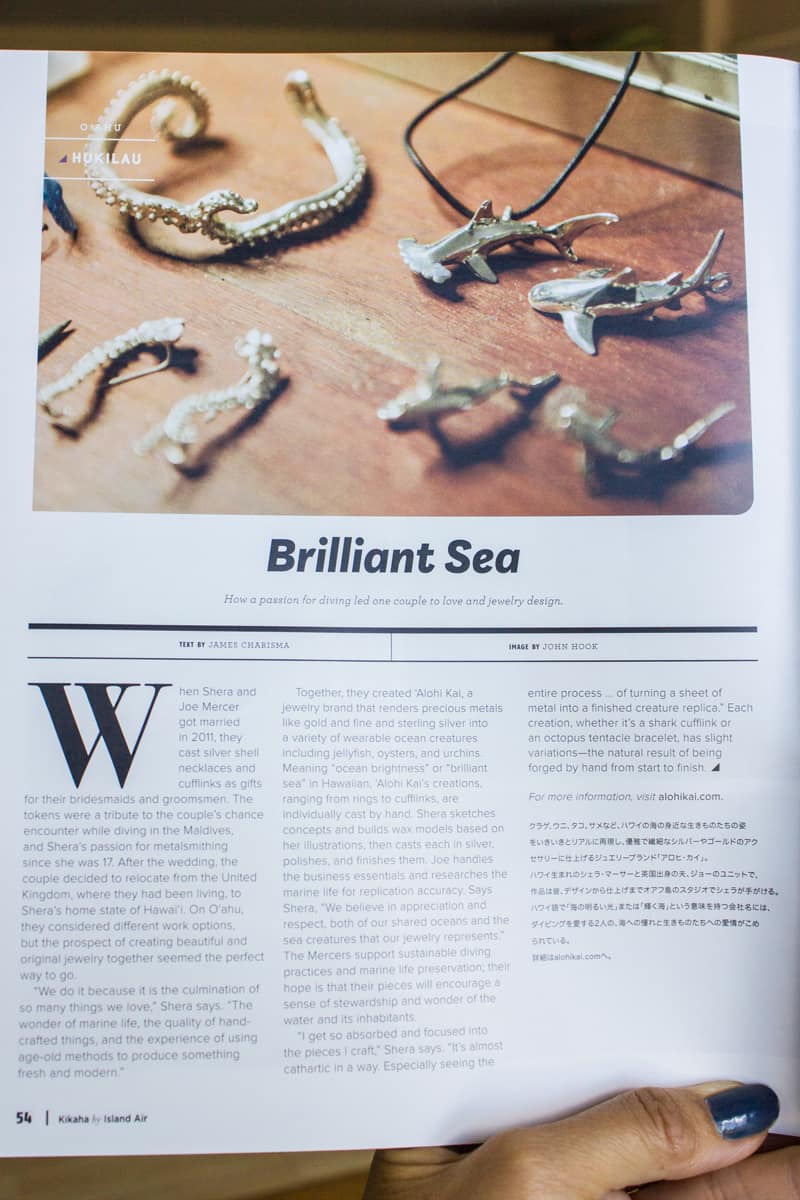 In relation to the article, I was asked, “why sharks?” I hate to admit, I gave a bit of a lame answer about their beauty, grace, and power. Not that that isn’t true, but there’s so much more to it! It’s so integral to how I see the ocean that it wasn’t until later I realised there was so much more to say. I’ve been blessed to have had the opportunity to dive some of the world’s truly amazing shark destinations and met people who are doing impactful work researching shark behaviour. Some places theyre there doing research, other places we were fortunate enough to be on trips with marine biologists. South Africa, Tiger Beach in the Bahamas, Cocos and Malpelo and Los Revillagigedos (aka Socorro) to name a few. I’m grateful not just for the experiences but for these peoples’ generosity in sharing what they are learning with lay people like we were. The experiences are far from the adrenaline-junky type you may expect from say, base jumping, but rather one of concentration, intention and learning. In fact, if you are hyped up on adrenaline, sharks can tell and you become, well lets just say they take a much greater interest in you! These are glorious dives, in the presence of primal wilderness, yet comforting and peaceful and beautiful.

Understanding why I am so passionate about sharks and their conservation requires an understanding of why the ocean is so important to us as humans, so I’m going to have a go at it here – strictly from my lay-person’s perspective (so apologies in advance to any scientists!). 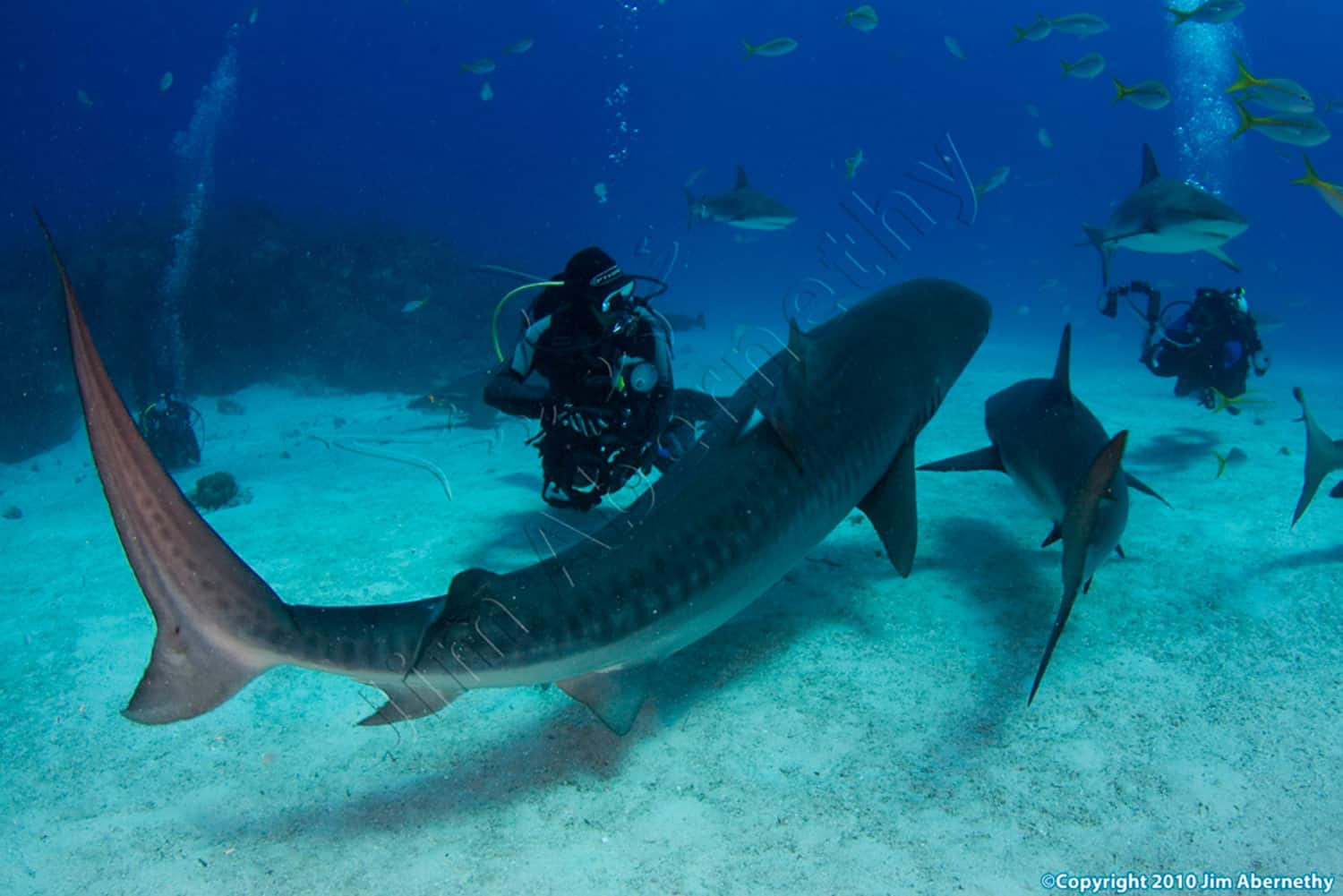 Let’s start with ecosystems – defined as a system that has significant interaction between living organisms and their physical environment. This isn’t about size – something smaller than a pond and larger than an ocean can be an ecosystem. It is something that evolves and develops slowly over time – and a stable ecosystem would be incredibly difficult to engineer! It has been done but because of the complexity involved it takes a lot of knowledge, insight and time – they are notoriously finely balanced. This balance has many faces; between producers and consumers, and between different organisms too. A disease that attacks a single species can have catastrophic effects on the entire system, likewise, the proliferation of one species could be just as disastrous – to potentially disrupt or even entirely collapse a system. Ecosystems have an equilibrium that must be maintained.

So now let’s look at the food chain; in the sea it starts with a producer, the very tiniest and awesomest of creatures, microbes called phytoplankton. These little guys are not only the engine of the marine food chain, they matter to people (and other mammals!) as they are an essential part of how oxygen is produced by the oceans – and oceans produce more than all the rainforests combined! 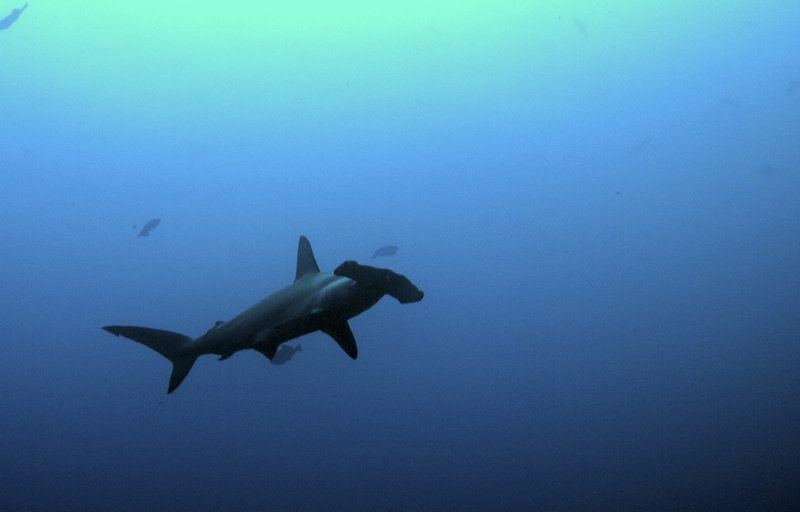 another time). Bigger fish eat little fish, and ultimately megafauna like tuna, swordfish and sharks (there they are!) eat the big fish. This is all part of the equilibrium. In turn, if the ocean ecosystem were to die, oxygen production would decline, and climate as we know it would end. Our thriving oceans affect other essential things as well – rainfall, currents, wind, CO2 elimination, and so much more. (again, apologies to those science-types for this vast over-simplification!)

So what does this have to do with sharks? Sharks are the apex predators of the ocean, the top tamale that keeps the balance of fish in check. Sharks regulate the seas. As such, the survival of sharks is essential to keeping fish populations manageable! Too much of one fish can mean the extinction of another, and lead to many follow-on impacts we just can’t predict. Without sharks, the ecosystem suffers, potentially disastrously. Some examples from Operation Requiem: 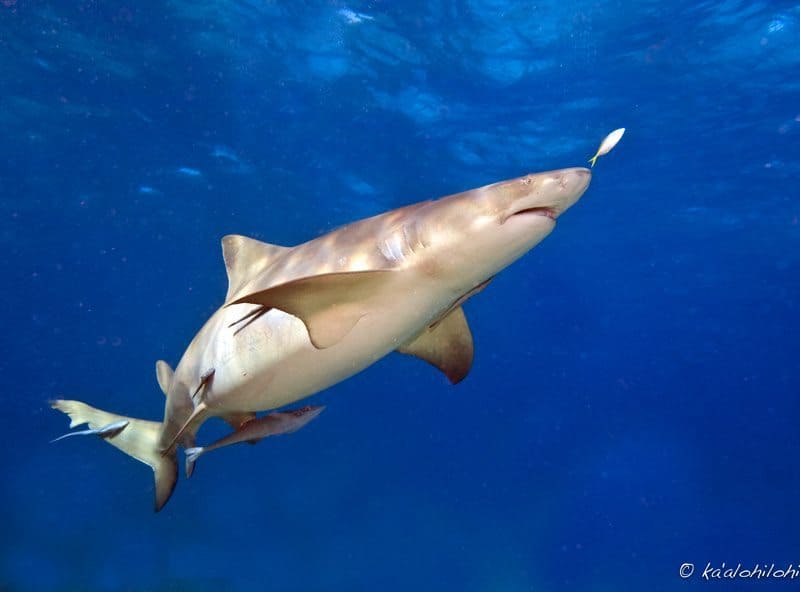 A world without sharks?
One study in the U.S. indicates that the elimination of sharks resulted in the destruction of the shellfish industry in waters off the mid-Atlantic states of the United States, due to the unchecked population growth of cow-nose rays, whose mainstay is scallops. Other studies in Belize have shown reef systems falling into extreme decline when the sharks have been overfished, destroying an entire ecosystem. The downstream effects are frightening: the spike in grouper population (thanks to the elimination of sharks) resulted in a decimation of the parrotfish population, who could no longer perform their important role: keeping the coral algae-free.

So back to the original question, why sharks? Well for starters, I think they are magnificent creatures. Sharks are not only an impressive force of nature, they are a symbol of its fragility and balance. They are the best of the ocean, and some of its most ancient creatures. Yes, of course they are intimidating, big and scary. They command and deserve respect. Sharks were designed by evolution to be predators, made almost entirely of muscle, and driven by 450 million years of instinct. They are in many ways, a perfect predator, with perfect design (and we all know how much I love good design!). And they have reigned supreme in the sea since before the first dinosaur. Simply amazing creatures.

Secondly, they are immensely important (see above!) And if they disappear, we don’t really know what would happen. At the very least it would destroy many food sources for us, at the worst, the collapse of the biggest ecosystem we have? Closely followed by weather and climate and then crops and food? Could we recover from that? It doesn’t seem worth it just to eat a bowl of soup.

Finally, they are startlingly beautiful and primal. Once you get past that fear factor (I know, I know, it’s a big one) look at their sinewy, streamlined bodies, built for speed. The shape of the dorsal fin is distinctly different between different kinds of sharks, as are the pectorals. They are a delight to photograph and to sculpt! (Don’t let that lack of texture fool you, getting the curves right isn’t super easy).

So why sharks? I love sharks, and (with safetly precautions!) I get in the water with them whenever I can. One of my favourite things on dive trips is to listen to stories of marine biologists and other professionals who study their behaviors; the more I learn, the more fascinating they are to me. And I adore photographing them. Don’t get me wrong, I don’t consider them, as my nephew asked (at age 6), “friendly” – I see them as the fierce predators they are. Which makes it so much more rewarding when they are willing to come near us, even interact with us. And you can be sure that I double and triple check my equipment, my buddies and my wits before getting into the water with them. We set up rules of behaviour, we check our clothing to minimize any distractions, and we agree on safety procedures. We make sure that people we dive with are both competent and safe divers, and most of all, we treat the sharks with respect. For there is a balance for us divers to maintain with the ocean too. 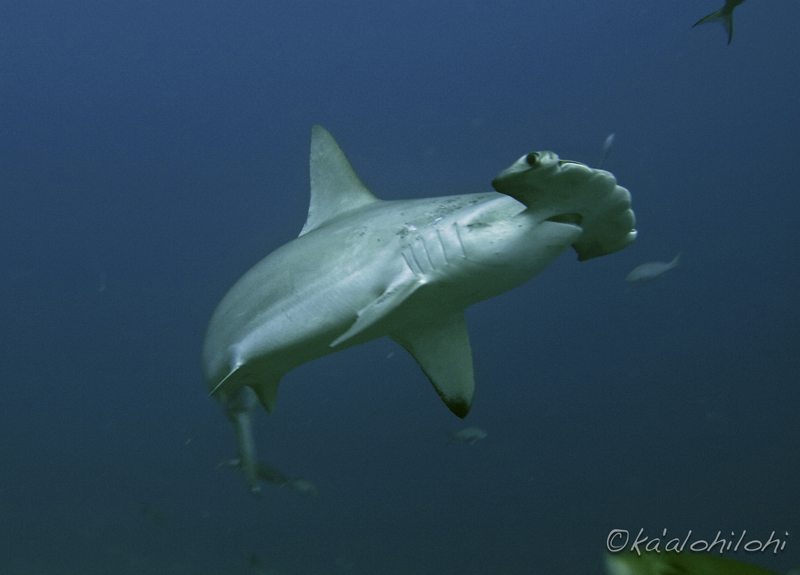