Malama – The Stars Aren’t Out of Reach 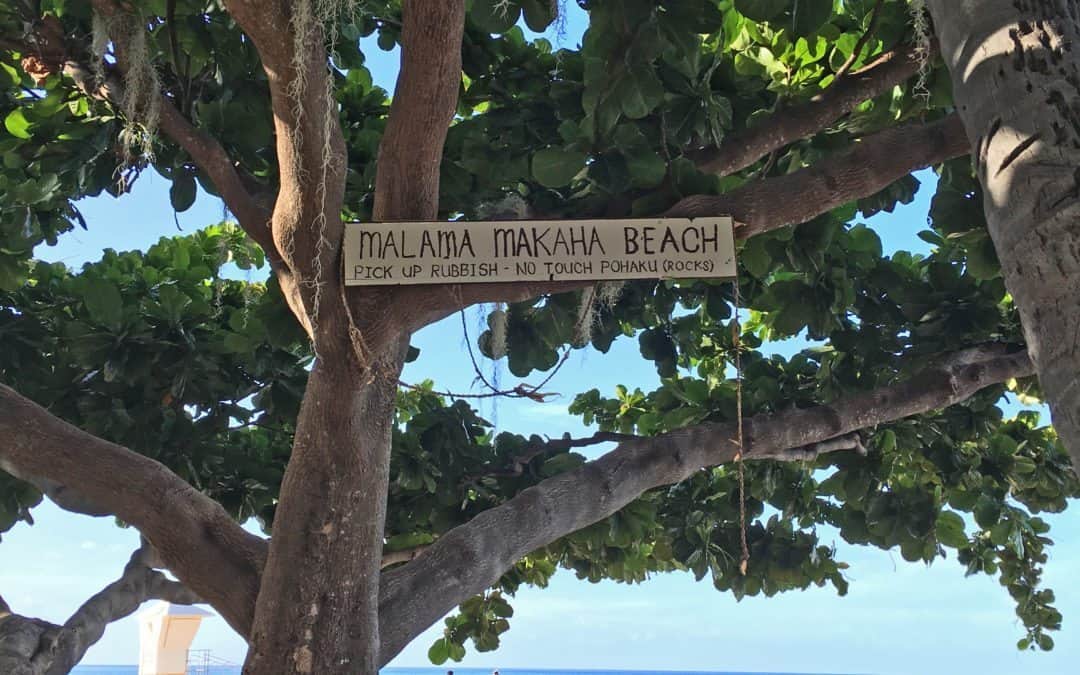 These days – the stars seem out of reach

But these days – there ain’t a ladder on the streets

These days are fast, love don’t last in this graceless age

Even innocence has caught the midnight train

And there ain’t nobody left but us these days

I’ve never been a big follower of Bon Jovi, but the lyrics seem to capture the feeling in the US these days. Such difficult times for so many people – hurricanes, wildfires, human rights issues, talk of war, actual wars, and all the human tragedies that follow. Sad times. We’ve been really lucky in Hawaii, and managed to escape any hurricanes or earthquakes this year. But from past experience, and watching Puerto Rico, and the rest of the Caribbean in frustrating helplessness, we know how vulnerable we are in the middle of the Pacific ocean.

So I wanted to share something that made me so happy. Because sometimes the best antidote is look to the little things that make our own communities strong – and the stars not so out of reach.

In Hawaiian, to Mālama means to take care of, care for, to serve and to honor, to preserve and protect. We hear it a lot in Hawaii. Malama Honua – care for the earth. Malama pono, be careful. Malama Hawaii or Malama Makaha are organizations who want to conserve and protect Hawaii and Makaha. When people care for our land and oceans, it sends a clear message to others who come – this is a place to be respected, this place is loved. This is not a place to leave trash, to trample or destroy.

Makaha is a lush valley on the west side of Oahu. Just north of Waianae, and south of Kaena point, Makaha Valley reaches all the way to the water, and ends in an unbelievably beautiful beach park called Makaha Beach Park. For Hawaii, this is a bit far from where we live, but its worth the effort to get there – the land and the reef are stunning, and its one of our favorite dive sites.

But for years Makaha beach park seemed neglected. The public restrooms were nothing short of feral. Garbage was often strewn along the beach. The beauty of the dive was often offset by the occasionally grim surroundings. Its not that the state neglected it, it was just not respected by some who used it. I say ‘some’ because while we don’t live in that area, and can only speak for our experiences, whenever we were there there were always groups of friends, family gatherings, paddling groups, and a lovely sense of community.

After a glorious summer diving the North shore we made the inevitable migration back west and south, and arrived to dive at Makaha, to brave the awful bathrooms, and lament the garbage strewn about. It had been many many months since we were there, and to our delight and amazement, we found it transformed. Someone had not only cleaned up the neglected beach park shower area, but created a beautiful landscaped garden. Large lava rocks encircled the trees, soil and plants had been placed within each circle to form a planter. 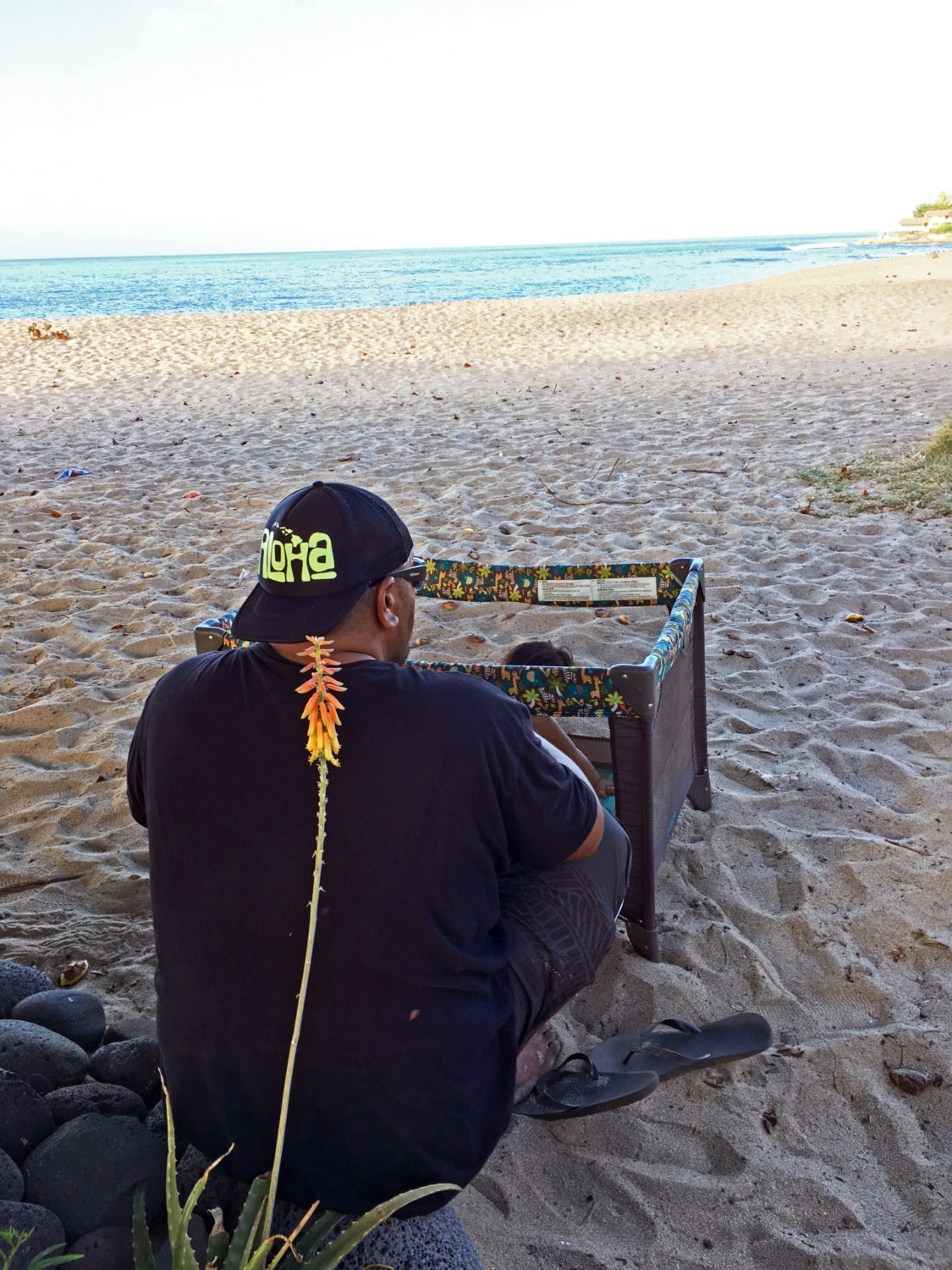 They’d built a channel from the fresh water showers to one of the hau trees, so the water wasn’t wasted. There was a garbage bin and a bag of garbage tied up next to it. The niu (coconut trees) were neatly swept. 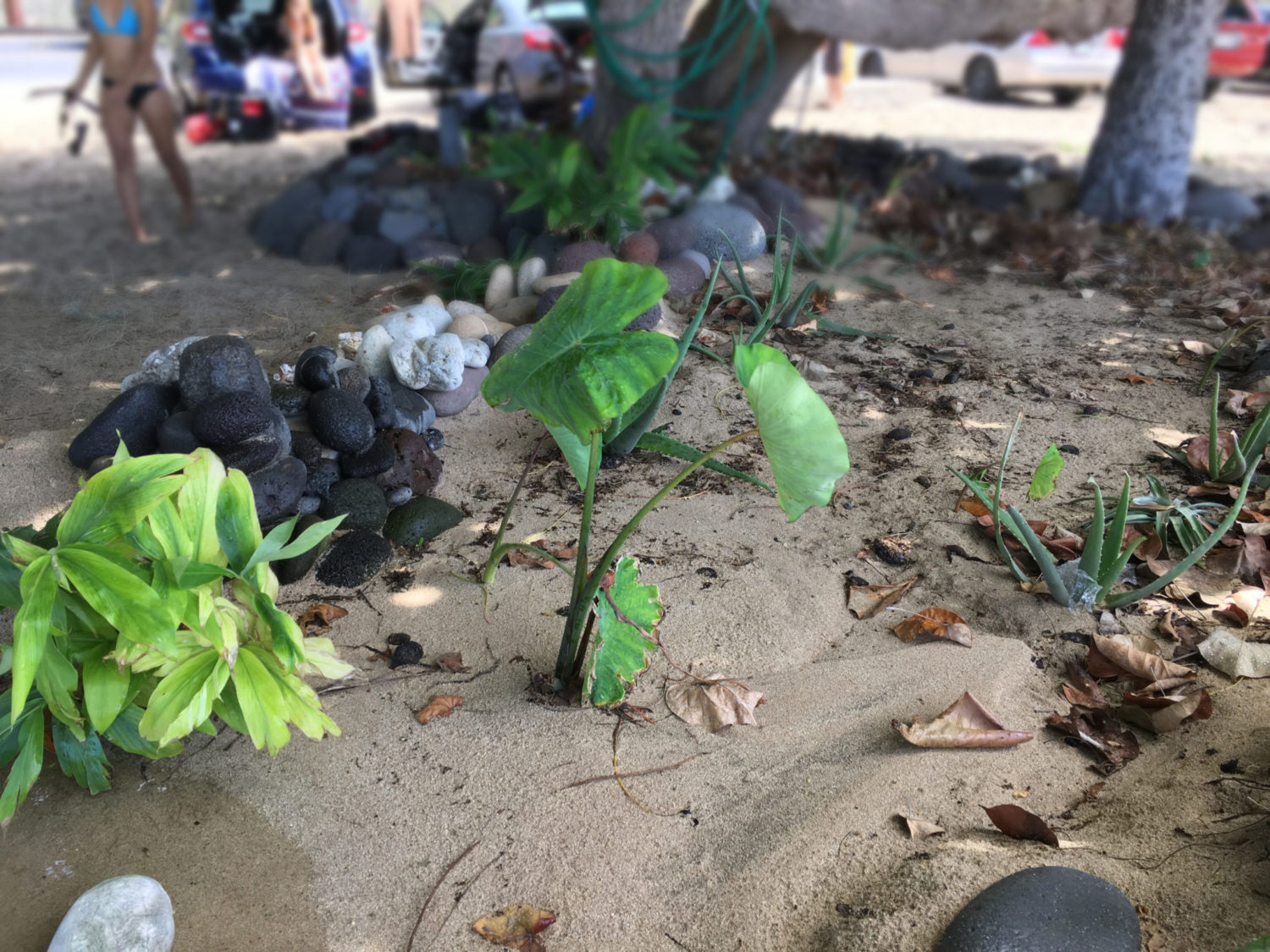 They planted kalo and aloe too, which benefitted from the constantly marsh-like ground downstream from the showers. It was now a place of pride. It felt pono. (Pono is a Hawaiian concept of righteousness, living pono is to do the right thing not only for yourself, but for the environment and others).

We heard it was a project for the high school nearby, that the students all worked hard to get this once disregarded part of the park to its current pristine and beautiful condition. There was a story too about a teacher who wanted this concept to be picked up around the state so assigned his class to do this work. And what a job they did! But what was more astonishing, is that it still looked amazing after all these months. 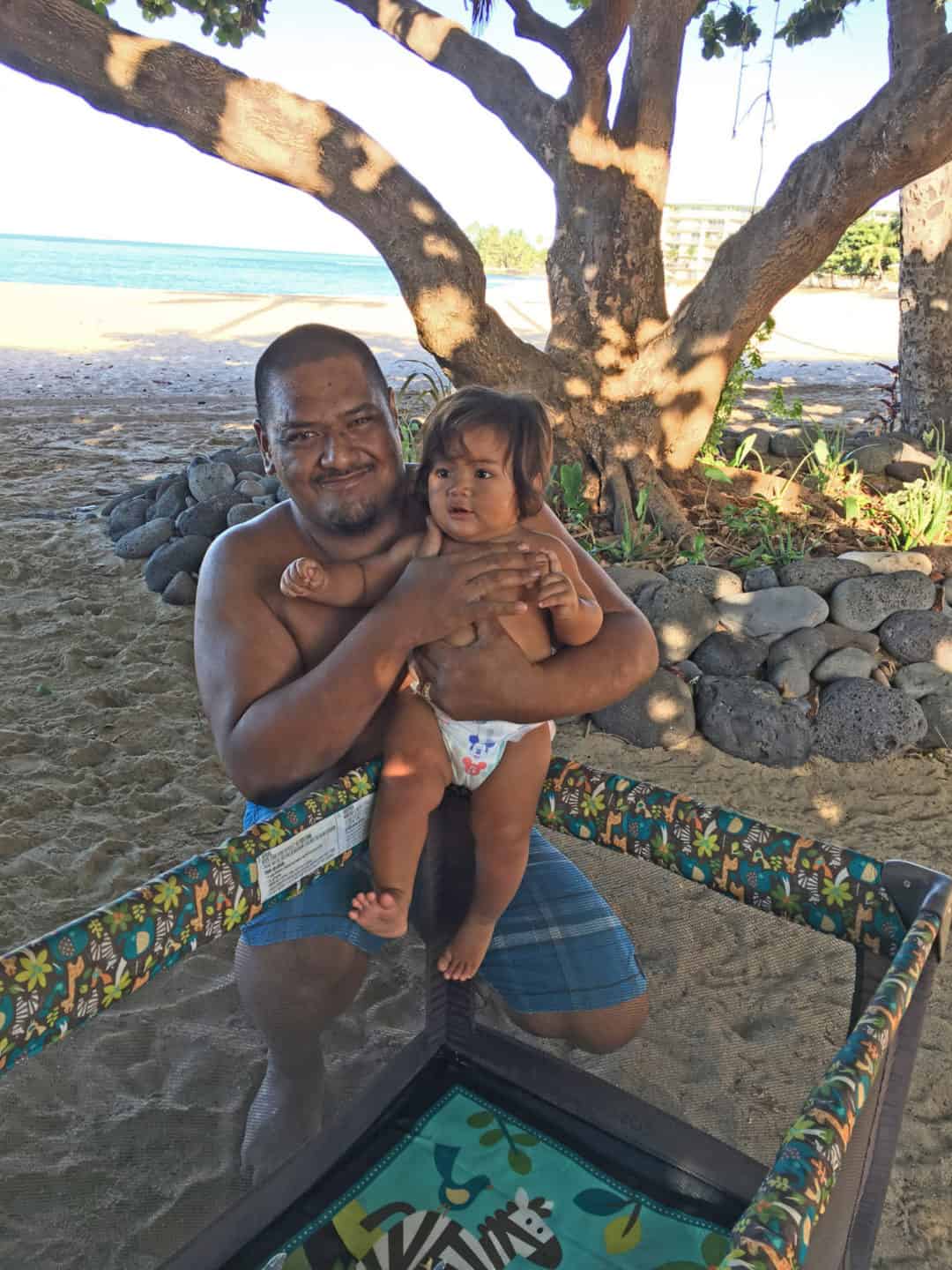 One day we saw a local man sweeping up the leaves. We rushed over immediately to say thank you for this beautiful gift! His name is Tony. Tony looks after the garden a bit now, sweeping the leaves, making sure the structures built stay in place. He gave us a big friendly smile, and shook our hands.

As I shook his hand, out of the corner of my eye I saw a sandy clearing that had been neatly swept between two large hau. Carefully placed in the center was a little portable play pen on legs. And in this little well-cared for pen, was possibly the most charismatic smile I have ever come across in all my travels. That smile belonged to a little round, milk-chocolate shaded 9-month old baby named Makaha. And oh what a child. This little boy could slay armies. You give him a smile, and he unfurls a toothless wave of unbounded joy and happiness at you. Healthy, strong and clearly loved, we were putty in his open baby embrace. I walked over to him, and he stood up in his little pen to greet me, deliciously chubby arms outstretched. Slayed!

The Hawaii state motto is memorized by every student in the state. Ua Mau Ke Ea O Ka ‘Aina I Ka Pono. The life of the land is perpetuated in righteousness. Like everyone else, I could rattle that off with the right glottal stops and perfect enunciation. And like everyone else, as a kid, I had no idea what that actually meant. The idea of living pono, of loving and looking after the ‘aina (the life-giving land), and the need to live in a way where you do right by others is something we are brought up with in Hawaii, but its not something most of us understand until we’ve grown up a bit.

So I enjoyed meeting both Tony and his precious little son. Not only because its really nice to be able to say hello to people by name, not just because we are grateful for his efforts, and not merely because its gratifying to see a father love and care for his child as Tony does. But because amidst all the tragedies in the news these days, all the anger, hate and discord online and in politics, and all the policies being proposed that take rights away from people who have worked for decades to get them, its just too easy to let it all weigh your days down. Too much to process, too much pain and suffering. The stars seem out of reach. And here was this act of giving and generosity, done with so much aloha! A project started by high school teacher and students, and continued by a resident, who is setting a beautiful example for his son. Teaching by doing, and setting the best example of how to live pono. With luck when the little boy grows older he will also want to look after his namesake. This is how we love and perpetuate our home.

Mahalo to the students, to Tony and to my little friend Makaha! We love what you have done.

(some of the jewelry inspired by our dives at Mahaha below) 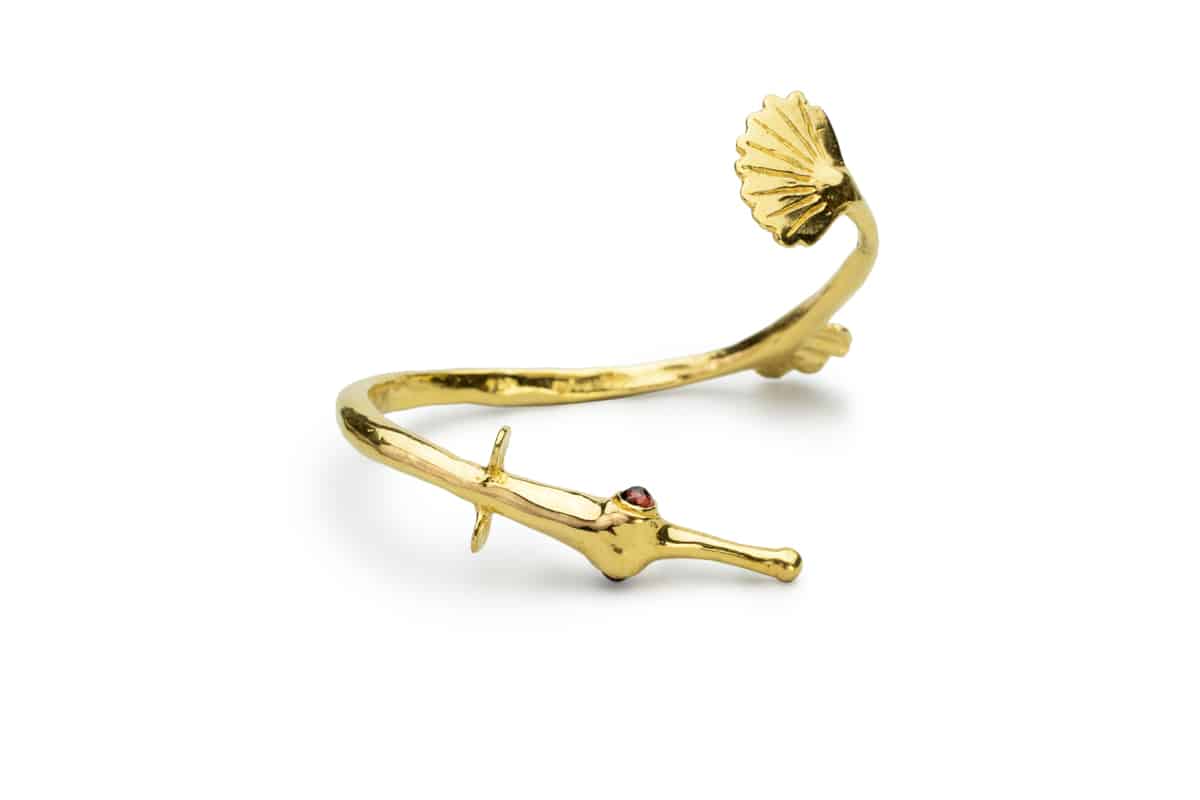 Pipefish cuff bracelet, sculpted from images of pipefish in the caves of Makaha 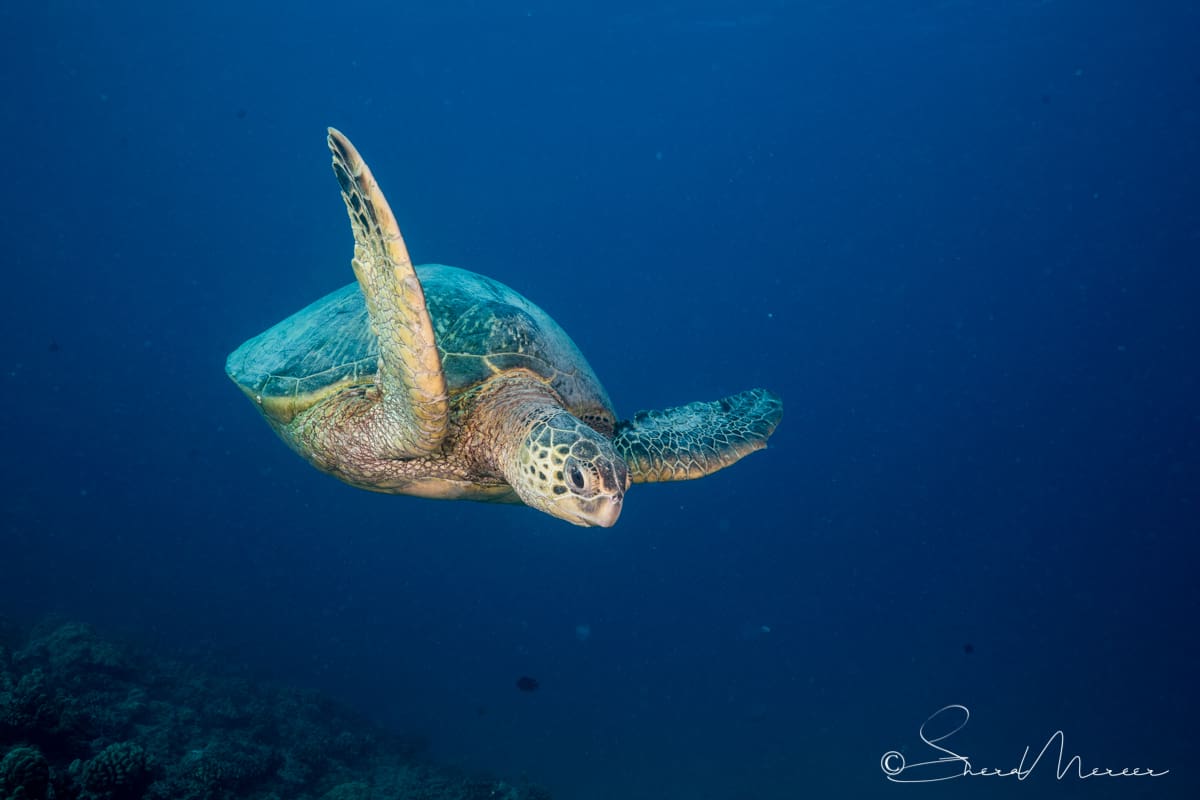 Honu necklace, carved from images of the many turtles at the Makaha cleaning station 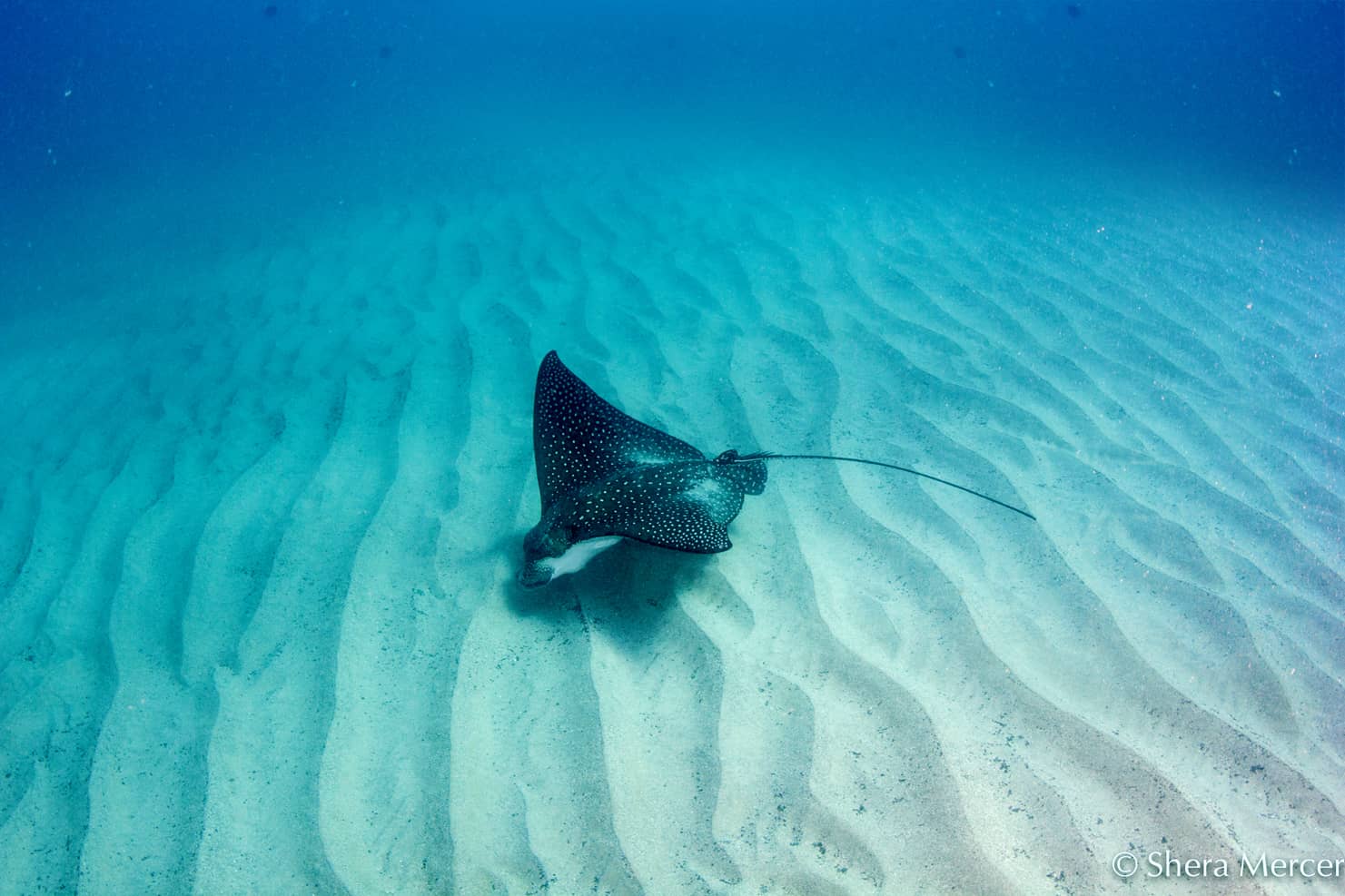